My new boots arrived today, much to the shock of both myself and the staff at the store. Shocked because they ordered them for me yesterday at about two o’clock and they did not expect them on this side of the upcoming weekend. So I was shocked and pleasantly surprised when I got the text informing me that they’d arrived. So buying them locally not only saved me money but was quicker also. Awesome!

So here they are.

So at the very beginning of this month (November) two of my best friends and I headed to Berlin for a week. Now initially I was going to Berlin to celebrate a friends birthday, one who just happens to live in Berlin… thus the journey. If you’re reading, Hi Nat!

Then as I was planning and getting my vacation days approved from work Amanda Palmer was suddenly stopping by Berlin for a gig, and just one day before my planned arrival, so I quickly shifted my plans to accommodate this.

Somewhere in between deciding to head to Berlin for Nat’s birthday and discovering that Amanda Palmer was playing a gig my two of my best friends had joined the trip. So we were now a trio going.

Now one of these friends is my oldest friend, she’s hung around and put up with me for the longest… yet somehow this would be the first time that we’ve ever done any travelling together…. and there are different kinds of travelling personalities and these do not present themselves before you are actually travelling… and so it was with a small amount of trepidation that I set out on this trip with my friends… luckily it all worked out, we had a splendid time… some minor tiffs were had.. of course but even friends, or perhaps friends especially, can get on your nerves… sometimes they even intentionally do so… for their own amusement the blighted bastards. However, I am digressing, back to the trip…

We flew to Berlin the same day as the gig was, landing a mere 2 hours and 45 minutes before the doors opened, we collected our bags at the airport and got a taxi to the Airbnb place.

I was quite impatient to get to the gig since I wanted to meet up with people before the concert actually started and my friends had to change clothes and fix a few things… and I became quite impatient as the minutes ticked away with seemingly little progress in getting us closer to the venue.

We got there a few minutes after the doors had opened and everything generally worked out since the place was not packed, crowded yes…but not packed.. and we had a great time… save for a few idiots at the concert (not friends of mine.)

I was a bit nervous in introducing my travelling friends to my other friends from the AFP fan groups… as someone in the fan-group once said ..”I’m bringing my  boyfriend with me to an AFP gig and meeting you guys… it feels like bringing him home to my parents.”

So my friends would be thrown into the deep end of the AFP-fandom pool, sink or swim… or run away screaming. After a few minutes inside the venue, I quickly found Nat, Megan, Angela and others from the group some had come early and was at the front but I had easier access to the bar and not too far from the stage a nearly perfect compromise.

The gig was hilarious, funny, fantastic and emotional… laughs, tears, alcohol and friends… all very excellent save for one thing.

Let me ask you this. If you attend a concert of the rock and cabaret variety. Would you be shocked when the audience sang along and talked amongst themselves between songs, generally when the artist(s) just bantered with the audience? Would you be annoyed to the point of being fucking obnoxiously rude?

It wasn’t just the fact that the guy was asking us to not sing along and/or shut the fuck up… it was the way he did it. Long story short, there was a fucking (yes the expletives are warranted) obnoxious guy next to us… some fun people too though so on balance not so bad.

So the concert was winding down, and I stayed behind with Megan to get things signed by and meet Amanda. It took quite some time but while queueing  I met some of the others from the fan group and had a blast talking with them as well, so time passed quickly.

After that, Megan and I met up with the rest of us, which at this moment consisted of myself, Megan, Nat, Gry and Benedicte. Now I could write at length about the events of this evening but I won’t… what I will tell you is that Benedicte had discovered that Pfeffi was a thing and that it was, I think.. the memory is a bit fuzzy, either 2 or 3€ per. shot… and so we had many of them… getting everyone to their respective homes/beds became a struggle, but it all ended well.

On the second day of travel…. I got sick, somewhat self-inflicted during the events of the previous night, in fact, me Gry and Benedicte all got sick… but it took some time before the lurgy* took full effect. So the second day was not so bad we recovered from the hangovers and went to a brunch/lunch with some of the people from the AFP fan group before leaving for some of their various destinations home. After that, me Gry and Benedicte went sightseeing. At some point, I sent them off to the East Side Gallery while I hunted for coffee. I’d visited it on my last trip, so I didn’t want to lessen the impact it had initially had on me by going again and being blasé about it.

One of the days I just hung out with Angela and somehow ended up doing some tech support (willingly) my revenge was making her spend money. I had my Wacom Bamboo Spark with me, and I think it took all of 2 minutes from when I showed it to her until she had ordered one for herself off Amazon.

I also introduced Shakespeare & Sons, an impressive bookshop and café, to both Nat and Angela… Angela bought something there as well. Jokingly we agreed that my trip to Berlin had become somewhat expensive for her.

The rest of our stay in Berlin was a combination of drunkenness, Nat’s birthday party comes to mind. Sightseeing and museums and just experiencing Berlin with my friends… we did not get to do it all. Which means that I’ll just have to go back again and again and again….

The penultimate day however we had booked a tour of the Reichstag late in the evening, however as the time to leave the apartment approached I really did not feel like I had the energy to move, walk or even think. The lurgy had blossomed. So while feeling slightly guilty about cancelling on Gry and Benedicte, that was at this moment lounging on the couch wrapped in layers and layers of blankets, I sheepishly told them that I was not up for it and that they should just go without me. The moment I mentioned it, the relief in their entire being was palpable. Like puncturing a balloon, my decision to not go made all of us just collapse in a heap of listless human beings. None of us did anything that day.

Berlin is one of my favourite destinations if you do visit the city make sure to stop by Shakespeare & Sons… epic bagels and tea. 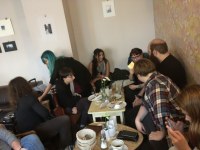 Taken out of context I must seem so strange -Ani